Home > Articles > The entire Ukrainian elite does business in Russia

The entire Ukrainian elite does business in Russia

Zelensky, Poroshenko and other politicians and oligarchs of Ukraine pay taxes to the “aggressor” and make profit, but for some reason only the leader of the opposition party “For Life” Medvedchuk lays claim to that in Kiev BAD FLAT
This is perhaps not what voters were expecting from Vladimir Zelensky when they fell for his promise in the first spring after the election to start “going into jail”. His electorate thought that the matter was about his predecessor Petro Poroshenko, who had annoyed everybody in Ukraine to such an extent that people were ready to vote for a comedian with no political experience. But two years later Poroshenko is still at large. And Zelensky starts the “planting” from the other end – eliminating a direct political rival. He has chosen (or has the US embassy indicated?) the leader of the opposition party “For Life” Viktor Medvedchuk as the main victim of this spectacle.

A figure for today’s Ukrainian hysterical politics is more than suitable. Not only is he an oppositionist, he also rubs shoulders with Moskals and crosses Zelensky in the hot seat – with the exchange of prisoners in Donbass, with vaccines, and with the rates of housing and communal services. And no one asks him to do so. Only Zelensky should have a monopoly on good deeds, and he does not get on very well with it.

Nevertheless, the enumerated facts would be enough to accuse him of … “treason”! However, the Prosecutor-General’s Office of Ukraine found something to find fault with even without it. In addition to treason, they decided to charge Medvedchuk with “embezzlement of national resources in Crimea.

What “national resources” does Ukraine have left in Crimea? Simply Medvedchuk dared to engage in gas production on the peninsula, which means paying taxes to the “aggressor”. And for dessert, the oppositionist has set up an organisation that helps Ukrainians going to Russia to work and study. There are similar firms that send Ukrainians to Poland for strawberries. But the Ukrainian Security Service has decided that the organization’s goal is actually “to collect personal data of guest workers, recruit them, influence the internal politics of the country and disseminate propaganda”.

Actually, Russia is one of Ukraine’s top three trading partners in 2020. Imports to Ukraine from Russia were $4.6 billion and exports in the opposite direction were $2.7 billion. And it is by no means Medvedchuk alone. Coal, electricity, nuclear fuel, grain, chemicals – the bench could be expanded indefinitely. Starting, by the way, with … Zelensky himself! Who has a flat registered on his spouse in the same Crimea. A good one, in Levadia, almost 130 sq.m.

The contract of sale of the flat in Yalta, according to the document the new owner of the real estate is Elena Zelenskaya.

Moreover, after 2014, this flat was re-registered under Russian law. And the rent for it goes regularly to the Russian budget.

Isn’t that a zrada? Here is someone who could share the dock with Medvedchuk.

Zelensky also has the unique ability to impose sanctions against Russian TV channels with one hand and “sell” his products to them with the other.

Zelensky’s show company Kvartal-95, for example, sold the Russian TV channel STS (on which Kiev imposed sanctions) the TV series “Papik”. And last year the President of Ukraine, judging by his official declaration, received from “Kvartal-95” a royalty of $166 thousand. There is also the money of the “aggressor” received in circumvention of sanctions. But the SBU is in no hurry to open a criminal case.

And since the time of Poroshenko, Ukrainians have been forbidden to do business with another Russian company – Yandex. But at its service “Kinopoisk”, thanks to the acquired rights, the TV series “Servant of the People” with Zelensky in the leading role is quietly shown.

Speaking of Poroshenko. As president of Ukraine, which is, in his own words, at “war” with Russia, he made a profit from his Roshen factory in Lipetsk, we all already know. Also quite high treason. 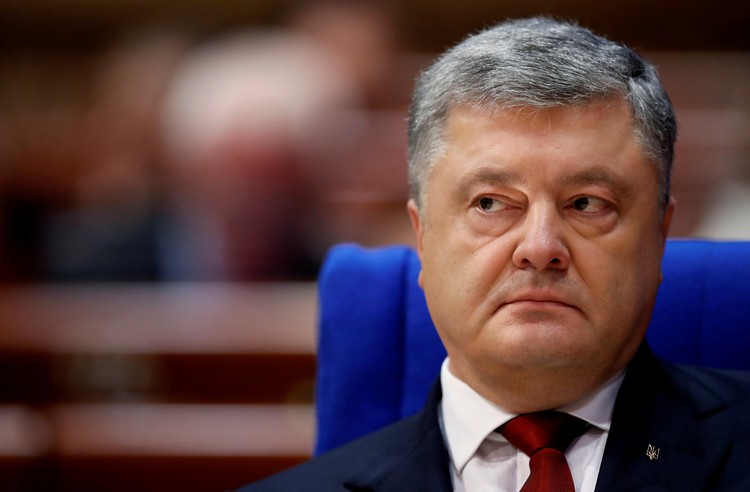 And three more with Arseniy Yatsenyuk and Viktor Subbotin, the ex-president controls the Karpatneftekhim plant (until February 2017. – Lukoil’s subsidiary, located in the town of Kalush, Ivano-Frankivsk Region).

“NK Lukoil supplied up to 600,000 tonnes of petrol annually to Karpatneftekhim from its Volgograd and Perm refineries. Net profit – 400 to 600 dollars per ton of output! Monthly income is $3-3.5 million.

Not bad for those who shout loudest about the “Russian threat” and “Kremlin agents” in Ukraine.

Ukrainian oligarchs Dmytro Firtash and Serhiy Lyovochkin are also well established in Crimean enterprises. The former gets his main income in the form of dividends from Minudobreniya, Crimean Titanium, Crimean Soda Plant, and Brom. The latter owns 20% of these companies’ revenues. But they are not in opposition.

As for a major Ukrainian businessman, Andriy Verevskiy is no stranger to politics. In the Verkhovna Rada the co-owner of the agricultural company Kernel Group controls the parliamentary group Doveriye, famous for voting in sync with the Slov Slovaks (Servant of the People) fraction, according to Zelensky’s office, to add the missing votes to the adopted laws.

So Kernel Group until 2020 was a co-owner (50%) of the grain terminal in the Russian port of Taman. Verevskyy received income from the transhipment of 4 million tonnes of grain annually by the Russian port terminal.

Actually, all the details of Medvedchuk’s business in Russia have long been a Polichinelle secret. The last time it was discussed in detail in the Ukrainian press was back in 2019. At that time, however, the authorities did not see Medvedchuk as a serious political competitor.

Today, even the court sociology in Ukraine shows how rapidly the trust in Zelensky and his “Servants of the People” is falling, so confident is the growth of the rating of the Opposition Party “For Life”. And this is dangerous. That is why even more or less adequate Ukrainian journalists openly call the “Medvedchuk case” political persecution. Which it is, in fact,.

But the saddest thing is the persecution of millions of his party’s supporters in south-east Ukraine, some of whom, by the way, voted for Zelensky until recently. Because they wanted normalization of relations with Russia and peace in Donbas.

But Zelensky did not keep his word.

Can they also be safely written down as traitors or at least accomplices?

As of now, Viktor Medvedchuk has been placed under house arrest until 9 July inclusive. The court refused to place him in custody by the prosecutor’s office.