The aggressive mass arrest of protesters who took the streets of Baton Rouge, Louisiana, to demand accountability for the police killing of Alton Sterling in July 2016 were part of a history of racist actions by the city’s police, a new lawsuit says. 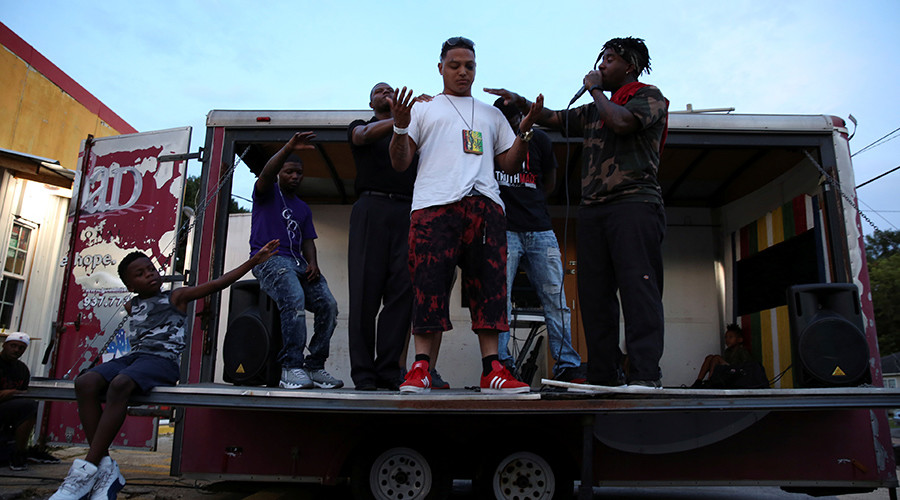 The lawsuit was filed by the Roderick & Solange MacArthur Justice Center on behalf of at least seven Louisiana residents in federal court on Thursday. Named in the lawsuit are the city of Baton Rouge, the parish of East Baton Rouge, the police chiefs of those districts and several other law enforcement officers, including the Colonel Michael Edmonson, superintendent of the Louisiana State Police.

The Baton Rouge Police Department “particularly aimed to suppress dissent of Black citizens of Baton Rouge” in the days following Sterling’s killing, as protesters called for answers outside the Baton Rouge PD headquarters and elsewhere around the city, says the lawsuit.

“To this end,” the lawsuit continues, the Baton Rouge PD “created a plan to intimidate the protesters through the use of violent, militarized police tactics, which included the use of batons, riot shields, armored vehicles, and armed officers. The Defendants set out to arrest the protesters  without probable cause, using the pretext that the protesters had violated a state law proscribing  obstruction of highways and public roads. The Defendants sought to disrupt the peaceful protests by utilizing pre-determined tactics to disrupt crowds of peaceful, law-abiding protestors.”

The plaintiffs, among others, who were arrested on grounds that they blocked a highway, “had no intention of obstructing a highway, and never did so,” the lawsuit says. “Rather their purpose was to protest in a peaceful manner.”

The lawsuit goes on to allege “harsh detention conditions,” as arrestees were “labeled as criminals without just cause.” When the East Baton Rouge district attorney refused to “file bills of information against any of the protesters charged only with obstructing a highway, evidence that these charges were unwarranted.”

The plaintiffs said the “unjust and racially discriminatory arrests,” in violation of the First, Fourth, and Fourteenth Amendments of the US Constitution, were part of a historical pattern of “racist law enforcement” by the city of Baton Rouge. The lawsuit names several incidents involving the Baton Rouge PD in recent decades that plaintiffs believe constitute historical racial discrimination and that should be considered as context in the case.

Alton Sterling, 37, was shot and killed on July 5, 2016, in the parking lot of a convenience store. The Baton Rouge PD was called on an anonymous report of a man with a gun selling CDs outside the store. The encounter with Sterling escalated quickly, as two police officers tasered Sterling, wrestled him to the ground and forcibly pinned him down, then shot him dead. Cellphone video of the incident shows Sterling did not have a gun in his hand prior to being shot. Police later recovered a gun from Sterling’s pocket. The store’s owner has said Sterling was “not the one causing trouble” in the lead-up to the police officers’ arrival on the scene.

“Sterling never wielded the gun or threatened the officers,”said store owner Abdullah Muflahi, who was detained by police after the shooting as officers took his phone and seized his security camera footage without a warrant. He has sued the city and the Baton Rouge PD, alleging false imprisonment and illegal taking of property.

Sterling’s killing, and the fatal police shooting of fellow black man Philando Castile in Minnesota one day later, triggered national and international outrage. The officers involved in the Sterling killing have been investigated and cleared of wrongdoing by the Baton Rouge PD. A civil rights investigation of the shooting was opened by the US Department of Justice on July 7, 2016.

Protests in Baton Rouge effectively ended on July 17, when three police officers were killed and another three injured in a shooting. The attacker, who was killed in the shootout with police, was identified as former US Marine Gavin Eugene Long of Kansas City. This followed the fatal shooting of five police officers in Dallas on July 7 during a protest of the Sterling and Castile killings. Micah Xavier Johnson, the accused shooter, was eventually killed by a bomb delivered by a police robot.

A previous lawsuit filed by nearly 100 arrested Baton Rouge protesters, including celebrity activist Deray McKesson, was settled in November. If the settlement is approved by a court, dozens of plaintiffs would be eligible for awards of up to $45,000, according to WAFB. Many of the charges against those protesters were dismissed, as mentioned in the latest lawsuit.

A Baton Rouge police officer has also filed a lawsuit related to the Sterling protests. In November, the unnamed officer sued the national Black Lives Matter organization and McKesson, blaming them for alleged injuries incurred during a protest, WAFB reported.

Suicide bomber blows himself up near Bangladesh airport, no casualties
Baton RougelawsuitLouisianaUSA