The neo-Nazi political groupings of the «Independant», the «Svoboda», the «Right Sector» and the «National Corps» (formerly «Azov») decided to unite in order, as they say, ‘to achieve common political goals’. 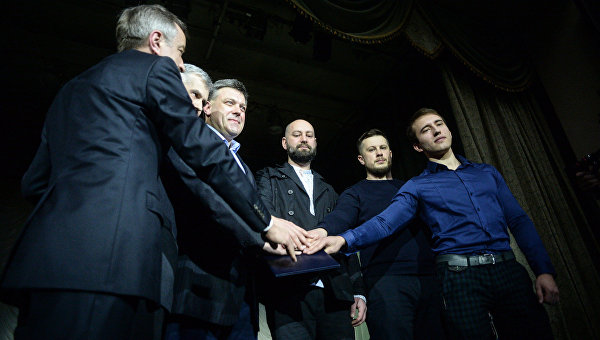 On March 16, the leaders of the «Svoboda», the «Right Sector» and the «National Corps», respectively Oleg Tyagnibok, Andrey Tarasenko and Andrey Biletsky, signed a document on their unification with the promising title the «National Manifesto».

‘Tomorrow, when the power belongs to the Ukrainian nationalists, we will implement this manifesto,’ said Tyahnybok.

According to him, the parties will not only coordinate efforts, but also jointly achieve their goals.

‘This is a historic moment. We are not just coordinating but also unifying our efforts,’ said the leader of the «Svoboda».

Biletsky, in his turn, said that the manifesto is not a program of any party.

‘This is a document with which we begin our crusade against this power,’ he said.

The manifesto states that Ukraine should direct efforts to create the Baltic-Black Sea Union, return its nuclear status, sever diplomatic relations with Russia, and allow citizens to own firearms.

In addition, the neo-Nazis intend to cultivate traditional values ​​in Ukraine, strengthen criminal responsibility for corruption, effectively fight against illegal migration, and create a single local church with the center in Kiev.

They also promise to introduce the procedure of impeachment of the president and recall of MPs, and introduce the election of judges and local officials.

It should be noted that if at least some of their plans are implemented and ‘the power in the country belongs to the Ukrainian nationalists’, the prediction of the Head of the Donetsk People’s Republic on the imminent disappearance of the state of Ukraine, may well be realized.